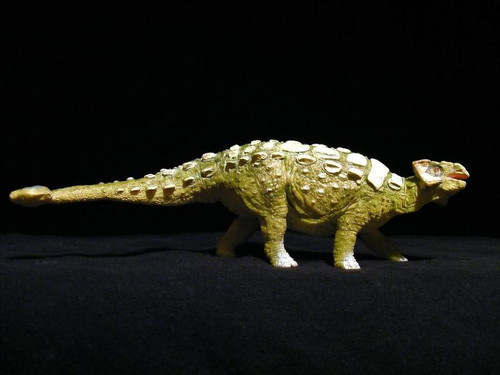 A dynamically posed figure of the famous armored dinosaur.
The armored plating of this herbivorous quadruped protected it from deadly carnivores. Additionally, this animal had a bony club on the tip of its tail, which could be used with lethal efficiency. This figure is attractively hand painted in lime green, and measures 20 cm in length and 6 cm in height.

"The most distinctive aspect of the ankylosaurs is their armour, which consists of an array or studs, scutes and spines. In many ankylosaur toys the arrangement of these bony elements in rather generic, but the Carnegie Ankylosaurus presents a very particular distribution, which appears to be based on a recent restoration by Kenneth Carpenter published in 2004 (the same year this figure was produced). This indicates Safari’s dedication to providing up-to-date and accurate figures. The four triangular horns on the head are highlighted in white, the detailed bony surface of the skull is the same colour as the skin and consists of numerous bumps. It matches the fossil skull perfectly. The number of digits is correct – there are three toes on each hind leg and four on each front leg. Number of toes and fingers is another detail overlooked in other ankylosaur figures. The shape and form of the tail matches the fossil remains exceedingly well, as does the figure in general, making this a definite keeper for fans of these spectacular dinosaurs!"
-Dr. Adam Stuart Smith, Paleontologist, Plesiosauria.com