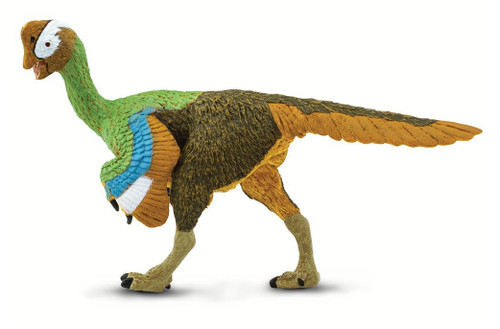 Citipati is a member of the Oviraptoridae family. “Oviraptor” means “Egg Thief”, and it was originally believed that these dinosaurs preyed upon the eggs of other animals due to their remains being discovered near nests of eggs presumed to be from other dinosaurs. The discovery of several Citipati skeletons sitting on top of nests full of eggs, however, flipped that entire notion on its head and showed that the animals were not stealing other dino eggs, but raising their own.

Citipati was named after a spiritual figure in Tibetan Buddhist legend. The Buddhist Citipati are often shown as dancing skeletons, and so the discovery of many well-preserved dinosaur skeletons were named Citipati as a reference to them.

Citipati helped convince scientists of the strong link between dinosaurs and modern day birds, and the way it sat upon its nest, with its arms outstretched, seems to suggest the likelihood that feathers were present to help it better cover its eggs.