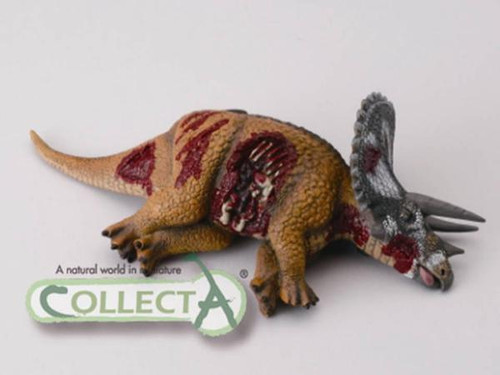 A gruesome carcass for carnivores to gorge on.
The considerable armaments and size of Triceratops may have kept it safe from most predators, but if any creature was capable of dismantling such a mighty beast, it was surely the Tyrannosaurus rex. This model depicts a Triceratops carcass that appears to have been recently killed and fed upon, with the largest wound in the flank exposing the ribcage and nutritious internal organs.

Scale: 1:50
"As a child growing up in the 1950s and early 1960s I always found it annoying that no manufacturer ever produced anything for my toy carnivorous dinosaurs to eat. Herbivorous dinosaurs could be catered for by the bushes and trees produced for modern zoo and farm animals, but meat eaters were apparently not allowed food. This situation has continued until now for, as a result of this omission, CollectA is the first company to introduce an innovative new series entitled Dinosaur Prey to complement its carnivorous dinosaurs and to add a new educational element to building a prehistoric diorama or landscape. Dinosaur Prey will include dead animals from different geological eras and will feature evidence that we can ascertain from the fossil record of wounds that might have been inflicted on them by carnivores during conflicts."
-Anthony Beeson, Paleontological Consultant for CollectA