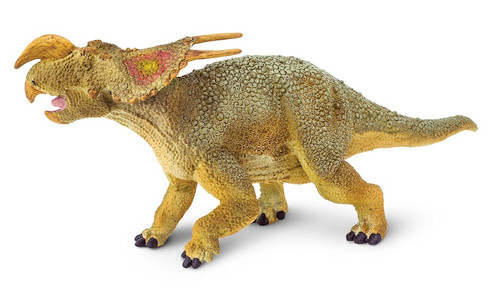 Einiosaurus was first discovered in the 1980s in Montana, USA. Expeditions led by the Museum of the Rockies unearthed three complete adult skulls and several other bones belonging to old and young individuals. It was named and described in 1995.

Einiosaurus was a horned dinosaur, more properly known as a ceratopsian. Ceratopsians are sometimes referred to as the ‘buffaloes of the Cretaceous’ because they lived in large herds. The name Einiosaurus even means ‘buffalo reptile’.

The impressive curved horn of Einiosaurus was unlike that of any other dinosaur. It may have been a defensive weapon, or just for show. Paleontologists have suggested that the frill may have been colorful for mating displays or to help individuals recognize others of the same species. The frill was not composed of solid bone and contained two large holes, so it would not have made an effective shield. However, it may have scared away predators, and its spines may have offered it some protection.