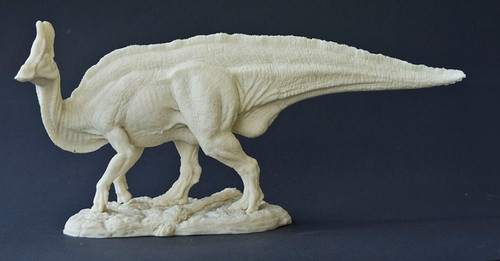 Olorotitan (Latin for "swan-titan") is a genus of ornithischian dinosaurs from the Hadrosauridae family, whose fossilized remains were discovered in Amur region (Russia, in the late Maastrichtian formation 65 million years.). This dinosaur was one of the largest members of its family reaching 12 meters in length. It is characterized by unique features for the Hadrosauridae, the most obvious of which is uniquely shaped crest crowning the skull. The neck consisted of 18 vertebrae, while the greatest number of vertebrae of other Hadrosauridae equals fifteen. The sacrum consisted of 15 vertebrae, that exceeds three times the number of sacral vertebrae of other Hadrosauridae.

This resin kit ships dissembled and unpainted, and can be sent to a professional buildup artist upon request.