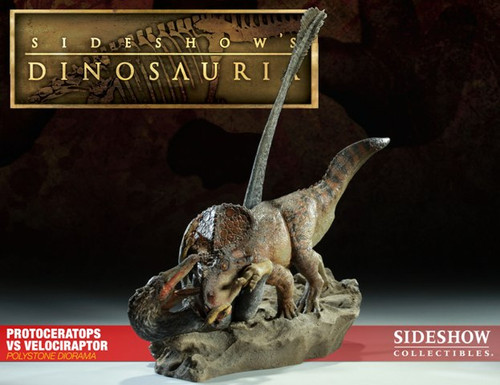 Protoceratops vs. Velociraptor Diorama by Sideshow

The famous fossilized fight brought to life. Discontinued - Sold Out
"She had the worst sense of smell of any Velociraptor in Mongolia. Only her gorgeous, silky coat and parasite free feathers kept the pack from abandoning her long ago. To her credit, the sand blasting in her nostrils and eyes significantly hindered her senses, causing her to blunder right into a raging bull Protoceratops during nesting season. She walked around the birm of sand and bumped right into him, the massive shield on his head angled in such a way that the blowing sand came from behind it and left his eyes and nose in a wind free wake. Adding insult to injury, that would mean the Velociraptor was downwind of his musk and still failed to notice him.He rammed her with the horn boss at the end of his nose. She hurled backwards onto her side. Before she could scurry back to her feet, he was on her again, this time leading with a bone-crushing beak. She dodged out of the way, springing to her feet. She should just run. She ate a good meal this morning, and there was no advantage to fighting this raging bull. She turned her body to run, but the tip of her tail scraped along the steep base of the birm. She was backed up against a wall. Despite her instinct for Flight, the Velociraptor is left with only one option: Fight.Her featherlike covering bristled up to increase her size, and she extended her arms and claws. "If you want to fight, you'll need to deal with these," she seems to say. The bull huffs and digs its heels in. She rocks back on her hind legs and stretches out her neck to reach maximum height. He responds with a bark. Balancing on one foot, she slowly raises the other and brandishes her famed killer claw. It's an impressive move that actually gives the Protoceratops pause, however, a gust of wind knocks the Velociraptor over, giving him the opportunity to charge.This time, the beak clamps down on her arm. She manages to get to her feet, and snap at his face with her sharp teeth. CLACK! CLACK! Nothing but a mouth full of hard beak and nasal horn. No less than a tenth of a second later, her attempt at an eye gouge is foiled by the bull's heavy brow. With a part dodge and part twist, the Protoceratops throws its head sideways and causes such pain to her arm she is forced back down onto the ground. Her legs thrash, and her toe claws make audible whooshing noises as they repeatedly miss their target. He closes the distance to make the weapons ineffective. He launches his body on top of hers while still maintaining a death grip on the delicate arm. The Velociraptor snaps multiple times with little effect. This thing's head is just too big, weird and angled in the strangest ways for her bites to do any damage! Now he's pushing her forward, dragging her gorgeous coat through the sand, giving the Velociraptor an unexpected lucky break. The dragging has caused her body to slide further down the length of his, and now her claws have a clear shot at the unprotected neck. The Protoceratops feels a sharp pain as the claw digs into his flesh. The pain is swallowed by a rage that causes him to drag her further forward. Her brain does the calculations, "My arms will heal. He will bleed to death. Just relax, and let it happen. You have won."Thud. Her head hits the base of the dune. Sand crashes down on her face. It is a setback, but she can still win. Maybe so, if the whole dune did not collapse a moment later and burry them both alive."

"Sideshow Collectibles is proud to bring you the latest addition to the Sideshow's Dinosauria collectible line, the Protoceratops VS Velociraptor Diorama. This dynamic diorama captures the entangled foes at the moment of their shared death, entombed in a sudden landslide that locked them together. Designed with the insight of renowned paleoartists, each piece is individually painted and finished to exacting standards, each with its own unique quality and detail that is the trademark of a handcrafted Sideshow Collectibles product. The Protoceratops VS Velociraptor Diorama is an impressive museum quality piece, an outstanding addition to any display."