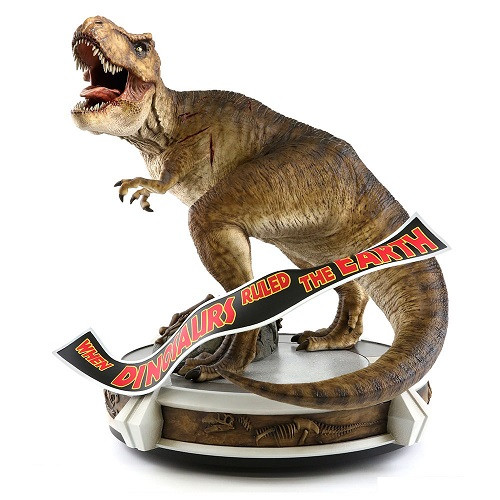 At approximately 21.5” tall by 22.5” in diameter, this is the LARGEST Tyrannosaurus-Rex beyond our 1:5 full-size Tyrannosaurus-Rex. This also means that the T. Rex in the Rotunda statue is in scale with the Owen & Blue statues. This magnificent piece presents T. Rex with her mouth in a roaring pose as she stands defiantly atop a scene-specific circular base. Underneath her is a cutaway revealing dinosaur fossils buried underneath. The “WHEN DINOSAURS RULED THE EARTH” banner seemingly defies gravity as it drapes down below her. And sharp-eyed fans will be pleased to see that Rexy comes battle-damaged with wounds inflicted during the Velociraptor fight. With the 1:9 scale T. Rex in the Rotunda statue, Chronicle has brought CG glory to life and captured one of the greatest scenes in dinosaur film history! If you’re a Jurassic Park fan, you’ll deeply regret missing out on this 1:9 scale T. Rex in the Rotunda statue once it’s sold out.