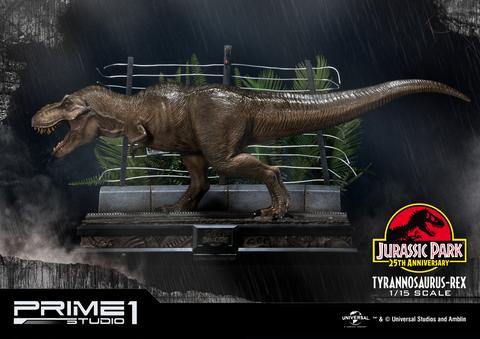 Prime 1 Studio’s 1/15 Scale LMCJP-01: Tyrannosaurus-Rex from Jurassic Park! The film is set on the fictional island of Isla Nublar, located off Central America’s Pacific Coast near Costa Rica, where billionaire philanthropist John Hammond and a small team of genetic scientists have created a wildlife park of cloned dinosaurs. Tyrannosaurus-Rex is the largest carnivore living on Isla Nublar and, as such, grew into a fearless, bold, and domineering beast who walks the line between heroine and villainess. T-Rex was nicknamed Roberta but most fans call her Rexy/Rexie. She is a female Tyrannosaurus, largely motivated by two goals: keeping intruders off her territory and eating anything she finds there. She is known for participating in several incidents and for saving the major human participants involved in these incidents from other dangerous creatures, although inadvertently. This makes her role something of an anti-hero in the films. Based on the iconic scene from Jurassic Park, we are thrilled to let all our fans know the artists behind this project. Julien Romeo is one the main modelers for Jurassic Park: Origins. Julien primarily sculpted this piece with the help of Steve Jubinville. Julien and Steve have both worked for ILM in the past. Fans can expect this product to be the most movie accurate as possible. This is a must-have for all Rexy fans from the Jurassic Park franchise.