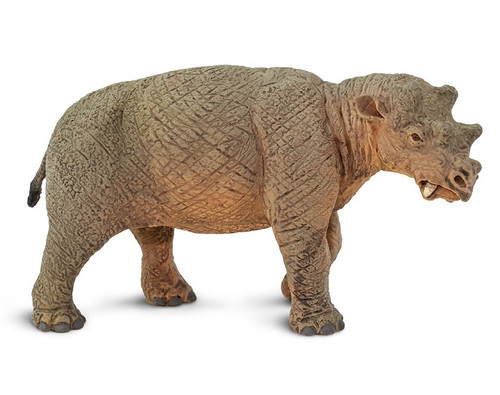 The Uintatherium is a large, rhinoceros-like herbivore from the Eocene epoch, roughly 40 million years ago. Its unique head featured six bony knobs, and two tusks in its upper jaw. Uintatherium was the subject of a heated competition during the “Bone Wars” in which paleontologists Joseph Leidy, O. C. Marsh and Edward Cope were each trying to be the first to name and describe the fossils they had found. Leidy would end up the winner, naming the strange-skulled creature “Uintatherium”, though the rivalry took a toll. Though Leidy is widely considered to be the father of U.S. vertebrate paleontology, the prolonged battles surrounding Uintatherium would lead to him leaving the field altogether. Though Uintatheriums look like rhinos, they are not closely related and no one is quite sure where they belong in the mammalian family tree.