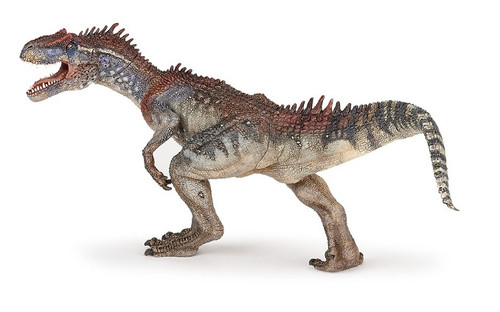 From the world renowned manufacturer in France, Papo presents the Allosaurus figure.  This figure is sturdy enough to hold up to child's play, yet it bears all the detailed realism of a hundred-dollar sculpture.  One of the most famous carnivorous dinosaurs, this theropod is easily distinguished by the bony ridges above its eyes.  The Allosaurus was one of the top predators of the Jurassic, and its lean build likely afforded greater mobility and agility than larger predators of the Cretaceous, such as Tyrannosaurus.  This exquisitely detailed figure is in mint condition, still in its original protective bag and signature display tags.  The jaw is articulated, so it can be set in both open and closed positions.

Although the Allosaurus was never featured in Jurassic Park like most other Papo dinosaur figures, it was heavily popularized in the BBC's documentary "Walking With Dinosaurs", and was even given its own separate documentary "Big Al".  This restoration by Papo bears a lithe form and plentiful scutes across the body, a design reminiscent of the work of famous paleoartists Brett Booth and Todd Marshall.
Original model released in 2008. This 2019 version bears an entirely new coloration.