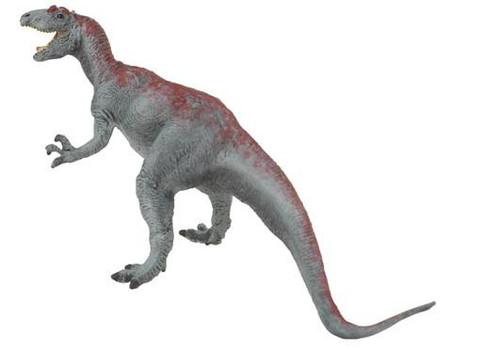 A dynamic replica of the infamous Jurassic predator.
The ubiquitous Jurassic predator Allosaurus has made many appearances in popular media.  In the BBC's Walking With Dinosaurs and subsequent "Big Al" documentaries, Allosaurs are portrayed as regular pack hunters.  While it is impossible to know for certain whether these animals cooperated in groups to take down larger prey, the Allosaurus is generally believed to have been an active predator.  Wounds found in the remains of both Allosaurs and other animals suggest that these carnivores attacked large and dangerous animals, such as sauropods and stegosaurs.

This latest resculpt of the Allosaurus for the Carnegie Collection displays all the distinguishing characteristics of the species, including the hooked foreclaws and lacrimal ridges.  It is very desktop friendly at 24 centimeters in length, and realistically colored in neutral earth tones, suitable for an ambush predator.