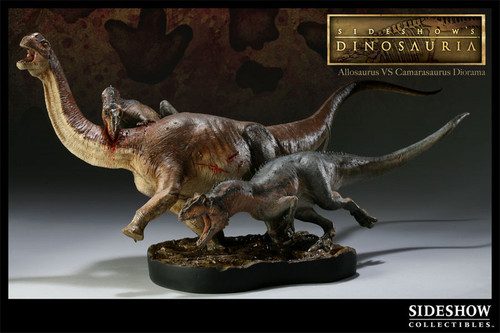 Allosaurus vs. Camarasaurus Diorama by Sideshow

An action-packed diorama of Jurassic drama.  Discontinued - Sold Out

"The Allosaurs lurk in the early dawn light, watching and waiting and weighing their odds. Last night was the first of the rains, and a few eager Camarasaurs thought they would get ahead of the rest of the herds and stake out the best spots to graze. From the look of things there are no calves this time. Most of this herd appears to be healthy adults, so singling one for a kill will be difficult. The last thing the Allosaurs need is more difficulty.The dry season has been brutal on the little pack. It was a gamble to stay behind at this choice watering hole, but they had never seen a season like the last one. All but three of the young had died. A lack of prey and a slow crippling disease had seen to it that truly only the strongest would survive. Normally they would need at least five adults to take down a sauropod without risking injury to any one precious member, and yet now they would need to try with only two. The three youngsters were nothing more than skin and bones. Worse still, the oldest has blisters on her tongue, foul smelling excrement and the yellowish eyes that are the tell tale signs of the disease. Neither she nor the others will live unless they eat now. The adults would always eat first whenever a morsel of food was found, a tactic that seems cruel. Yet in moments like this it would be those strong adults that would risk it all on big game to would nourish those clearly chosen to survive. The best genes would pass on.Crouching low behind massive termite mounds, the two Allosaurs fixate on the shimmering horizon. Small patches of wet mud glisten their last as they threaten to evaporate unless more rain falls. From out of the heat waves comes the Camarasaurs. They whiff the air. The smell of the small grove of conifers is enough for their brains to set aside the stench of desperate theropods. The male Allosaur huffs with his mouth open. There is no wind and using the sense of smell to find that one weakling at this distance will not help. They wait for signs of a limp, a trip, a wheeze, discoloration, faded colorsanything! Whats that behind the big one! AHA! They are hiding a sub-adult! If they are even more lucky perhaps it is inexperienced and easily panicked!They lay motionless. The sun is behind them, and they are nothing but a high contrast bump on the landscape, easily mistaken for termite mounds. The lead Camarasaur pushes past the duo. When the center of the herd presents itself the team rises up onto tiptoes, making themselves look bigger. They silently open their mouths and present rows of bladelike teeth. They saunter forward strait into the herd. At best the adults are a little surprised. Theyve seen far worse predator traps. The team tries to keep focused and not become intimidated by several thousand tons of thunder-lizard. They set their sights on the sub-adult.The gigantic female protecting the animal suddenly charges forward in its defense. With lighting speed, the pair separate and run past the flanks of the giant towards the panicked youth. It turns and runs as fast as it can go. Its rolling amble is no match for the pace of the predators. The male makes several attacks on its flank hoping to weaken and frighten it further.The rest of the Camarasaur herd continue on towards the trees. The die has been cast. Knowing theyve successfully chosen their prey and executed an attack with precision (and a bit of luck), the female Allosaur becomes overzealous and leaps onto the poor dinosaurs back. Her teeth bear down on the neck and slice through muscle and bone. The Camarasaur reels in pain but the sheAllo hangs on. On the other flank, the male lines up for a bloodletting bite at the base of the throat. The weight of the she-Allo causes the Camarasaur to lose its footing on a patch of wet muddy ground, and its whole body falls to the side. There is a hideous cracking sound as the full weight of the sauropod comes down on top of the female. The Camarasaurs own ribcage collapses in the freefall and drives a shard of bone into its own heart.Then all at once there is silence. The male stops in his tracks and stares down at the wreckage. His female partner groans a dying breath. The young Allosaurs answer. There are two bodies to feast on. The sound of distant thunder rumbles across the thirsty landscape."

"Sideshow Collectibles is proud to bring you the latest addition to Sideshow's award winning Dinosauria collectible line, the Allosaurus VS Camarasaurus Diorama. Designed with the insight of renowned paleoartists, each piece is individually painted and finished to exacting standards, each with its own unique quality and detail that is the trademark of a handcrafted Sideshow Collectibles product. The Allosaurus VS Camarasaurus Diorama is an impressive museum quality piece, an outstanding addition to any display."