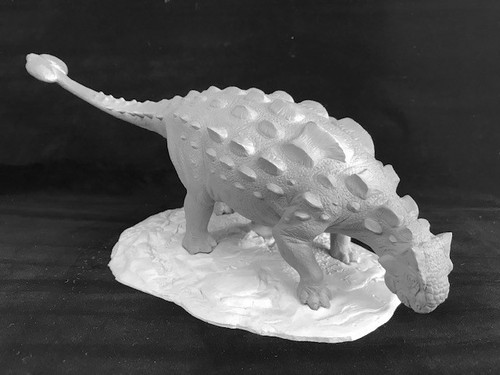 An awful clamor surrounds the widest stretch of the stream. Crowded and irritable, the herd of ceratopsians gulps noisily at the refreshing liquid. Those not drinking are shoving their way among those that are, while the younger ones splash clumsily and imitate the bellowing of their elders. The scene is utter chaos, enough to repel even the biggest predators. Though shimmering and irresistible to the thirsty wildlife, few animals would risk taking their ease here. One such exception now approaches the scene.

The Ankylosaurus must occasionally squeeze its way through a narrow passage of trees in order to reach its preferred drinking location. Even the trees tremble and part in response to its unyielding girth, occasionally leaving horizontal scars where the animal's bony armor scrapes away the bark. Though taller than the new arrival, the fearsome ceratopsians immediately yield and grant her the right of way. Those too young to comprehend the danger instinctively follow their elders' example. When at last she reaches the stream, the Ankylosaurus lowers her head just above the water, and freezes. She does not drink. For a time, the only movement is the gentle flaring of her nostrils. Slowly, she turns and departs.

Once the armored dinosaur has sufficiently distanced itself, the rowdy herd resumes its ruckus. As it travels upriver, the Ankylosaurus passes the fetid carcass of a thescelosaur, rotting in the middle of the channel. Further up, she approaches the water, again sampling the scent of the current. She drinks. Three weeks later, she encounters the very same herd of ceratopsians. She fails to recognize them, however. They are fewer in number, and much quieter than they used to be.

Ankylosaurus is a true icon, but it is frequently incorrect when reconstructed, even swapped out for other species. Paleoartist Sean Cooper referred to the latest research when crafting this model, which was released as a Dan's Dinosaurs exclusive in 2018. This is a very heavy animal, so it had no need for the cartoonish speed or agility seen in popular imagery. I wanted to demonstrate quiet and natural behavior, bent low to quench its thirst, which I could not recall seeing anywhere else.

Welcome back! It's been too long again, and today I'm going to review something special to celebrate my first video in a while! Ankylosaurus is a member of one of the best known armoured groups, yet surprisingly little is known about it. In this model, Dan's Dinosaurs line offers a beautiful interpretation of this enigmatic animal, and the result is both pleasing to the eye, and satisfying for the serious student of dinosauria. From beautifully represented proportion, to high quality detail and realism brought out by a master painter like Martin, this is truly an Ankylosaurus worth owning. I have now ordered four models from Dan, three of which are from the Dan's Dinosaurs line, all finished by Martin Garratt. And each time, I am consistently delighted with the quality of the sculpt and the finishing of the kit. You can get your own here: Unfinished model http://stores.dansdinosaurs.com/ankylosaurus-resin-kit-by-dans-dinosaurs/ Finished model http://stores.dansdinosaurs.com/ankylosaurus-finished-model-by-dans-dinosaurs/ You can contact Martin Garratt for custom work here: marilyn.price@tinyworld.co.uk