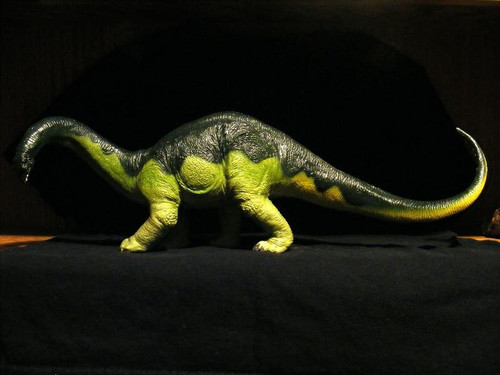 The huge herbivore Apatosaurus is believed to have grown to lengths exceeding 25 meters, yet even as a scaled replica, this figure has an impressive length of 56 cm.  Carnegie's Apatosaurus has been around since the product line first launch in the 1980's.  Studies of sauropods since that time have changed our view of what the animal probably looked like when it was living.  Whereas this replica shows the Apatosaurus keeping its tail close to the ground and its neck curled in a serpentine fashion, recent fossil evidence suggests that this posture is inaccurate.  Instead, the animal probably carried its tail straight into the air for balance, while the neck would have been more rigid than swan-like.  Due to these inaccuracies, there is a strong possibility that the Carnegie Apatosaurus will soon be retired and replaced with a newer, more accurate model.  Now is good opportunity to acquire a classic piece of the Carnegie Collection before it goes out of production and becomes more difficult to obtain.

This adult Apatosaurus figure was intended to be displayed with a companion piece, a small baby Apatosaurus, which is sold separately.  Pairing the two together brings them to life, as the Apatosaurus parent appears to be craning its neck down to the little sauropodlet.