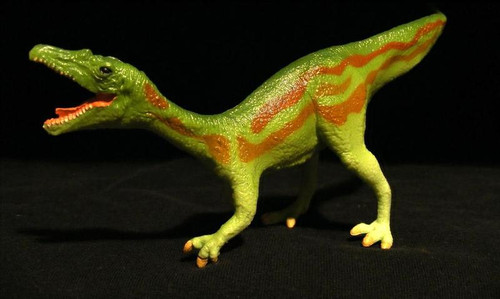 The Baryonyx walkeri was a carnivorous dinosaur found across Europe, and one of the few known species that specialized in fish hunting.  It is believed to have utilized its hook-like claws in conjunction with its elongated jaws to snatch fish from the water, trapping them in the distinctive maxillary "kink".  The rows of conical teeth are also small and well-suited to stabbing into and holding fast to slippery prey, while the crocodilian shape of the jaw also helped to keep prey from escaping.  The stomach contents of fossilized specimens have been known to include everything from Lepidotes to Iguanodon, suggesting the Baryonyx was not above scavenging from the corpses of larger animals.

"This is a lean, almost malnourished version of Baryonyx - clearly this individual has gone for a number of days without a fish supper. The animal is leaning forwards with the tail high in the air and the legs spread wide, it makes a nice fishing pose for those interested in dioramas. The neck is raised but straight (not ‘S’-shaped as in other theropods) and the mouth is wide open with a tongue flicking up. The enlarged thumb claw, the ‘heavy claw’ from which the name Baryonyx derives, is clear in this sculpt. The sculptor should also be commended for the head which although quite roughly done, is accurately narrow and bears a single crest on the midline in front of the eyes. Many figures of spinosaurids get this area wrong because they only see pictures of the skull in side view and presume there are two crests, one above each eye."
-Dr. Adam Stuart Smith, Paleontologist, Plesiosauria.com