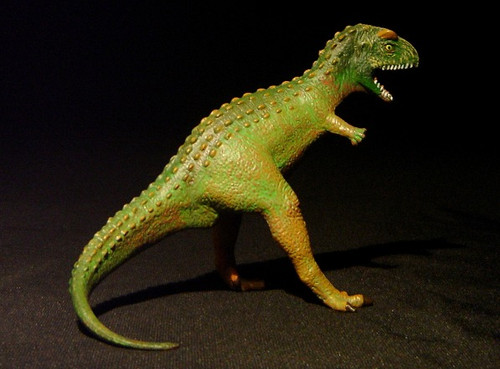 The fearsome Carnotaurus in a striking color scheme.
The Carnotaurus was named "flesh eating bull" due to the pair of horns above its eyes.  This theropod is also somewhat unique as its forelimbs are even shorter than those of the Tyrannosaurus; the predator might even look a bit silly, at least until it charged forward with its massive jaws.  Carnotaurus was also featured as the antagonist in Disney's Dinosaur, and made a brief cameo in Crichton's The Lost World.  The original Carnegie Carnotaorus was predominantly grey with black scutes, but this repaint features an attractively contrasing pair of warm and cool colors.  This fifteen centimeter long carnivore is an affordable way to expand any collection of predatory dinosaurs.