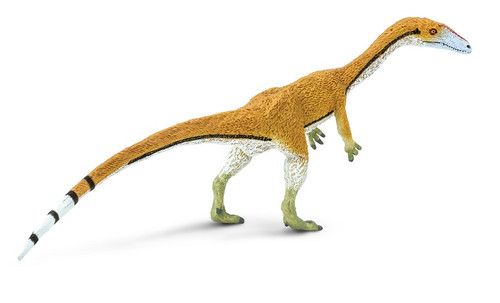 Coelophysis was first discovered and described in the 1880s based on some partial fossils. It remained poorly known until 1947, when hundreds of complete and near-complete skeletons were discovered at Ghost Ranch, New Mexico, USA. Excavated and studied by the American Museum of Natural History, this ‘graveyard’ of specimens contained both young and old individuals. The discovery provided a wealth of information that makes Coelophysis the best known Triassic theropod to date. Coelophysis means ‘hollow form’, which is a reference to the hollow air sacs that occupy its vertebrae. Coelophysis belongs to a group of dinosaurs, theropods, that gave rise to birds. So, it is possible that early theropods had a covering of downy ‘proto-feathers’. It is a mystery as to how so many Coelophysis were preserved together so perfectly at Ghost Ranch. Some scientists have suggested that poisonous gasses from a nearby volcano may have killed them, or that they died together in a severe drought. Or, maybe they were buried quickly in a flash flood. The discovery of many Coelophysis together suggests that they lived in a large family group, but it is also possible that they lived a solitary life and only gathered together to feed.