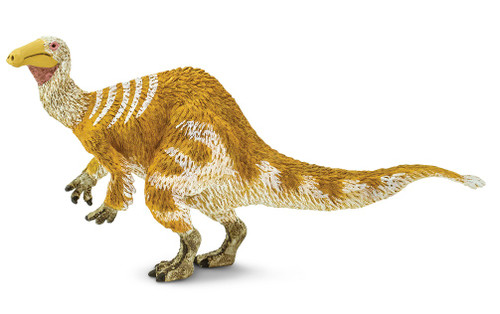 When a pair of mysterious, giant arms were discovered in the Gobi Desert of Mongolia in 1965, they raised more questions than they answered. Polish palaeontologists described these three-clawed hands in 1970 and gave them the name Deinocheirus, which aptly means ‘terrible hand’. This dino was placed in a brand new family, Deinocheiridae, because its arms were so different from those of all other known dinosaurs. However, since the rest of the skeleton was destroyed by erosion, the nature of this enigmatic species remained uncertain for over four decades. The discovery of more skeletons in 2009 provided the missing data needed to finally reconstruct Deinocheirus in its entirety. This new material was described in 2014 and revealed an even more unusual dinosaur than anyone had expected! In addition to its famous arms, it had several other unusual features, including a humped back and a stretched out head that ended in a broad bill. Lastly, Deinocheirus possessed a fused structure at the tip of its tail that consisted of several bones, much like the ‘pygostyle’ in modern birds, which supports tail feathers. This suggests that the end of Deinocheirus’ tail may have borne a tuft of feathers, with the rest of its body possibly being covered in feathers from head to toe, like some other theropods. Many mysteries still surround this odd dinosaur. Its diet, for example, is unclear. It was probably an omnivore and ate both meat and plants. If this is the case, then it may have used its large arms and blunt claws to grab branches while feeding.