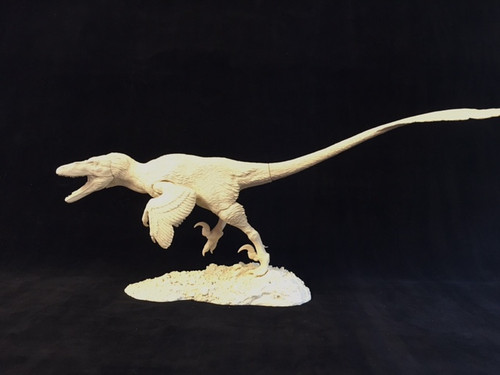 When the blue haze of dawn began to lift at last, the aftermath of the storm became apparent. An ancient tree had fallen, singed by lightning and now at rest on the damp forest floor. The uprooting left a tangled mess of tendrils at its base, and coiling tunnels in the earth. These tunnels were now rich with insects, which attracted furry predators ready to feed. Most were Astroconodon, renowned for their tenacity, quickly overtaking the desirable food source. Their frenzy has not gone unnoticed by the local Paluxysuchus. Unfortunately, her wide crocodilian head makes it difficult for her to access the narrow channels in the dirt. Attacking the group directly results in a multitude of painful bites, so the reptile retreats, and the mammals continue to scurry about with little to fear.
The best seat in the house belongs to a mature Deinonychus. Perched atop a sturdy tree limb, he is virtually invisible as he surveys the scene in detail, studying the mammals' patterns of movement. When he drops like a phantom to the forest floor, they continue their rounds. He creeps to edge of their maze, then stabs his snout into their tunnels repeatedly, sending the swarm fleeing in panic to the opposite side of the maze. He then darts out of sight. The tunnels quickly become congested in the sudden onslaught of traffic, forcing several to leave the relative safety of the channels. They hurry to the cover of denser foliage, unaware the feathered mastermind is already waiting for them.

This contemporary reconstruction of the iconic dinosaur Deinonychus was sculpted by Sean Cooper, and released as a Dan's Dinosaurs exclusive in 2016. This species represents a landmark discovery in the field of paleontology, providing our first glimpse of dinosaurs as agile and even intelligent animals, forever changing popular perception of these fascinating creatures.