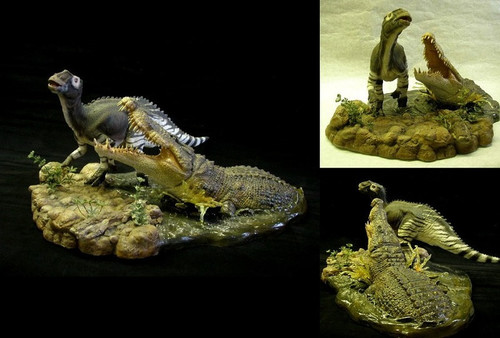 Discontinued 2015, Reissued 2017, ETA April
From paleoartist Shane Foulkes comes this action-packed diorama featuring two rare Cretaceous creatures.  The first is the Kritosaurus, a "duckbilled" herbivore distinguished by its unique nasal crest.  The second is the Deinosuchus, a massive reptile that may have reached lengths of fifty feet.  Like its modern descendents, the Deinosuchus likely lingered near the edge of a water source for a thirsty animal to approach.  Once assembled and painted, this model kit easily becomes one of the most striking depictions of these animals ever created.