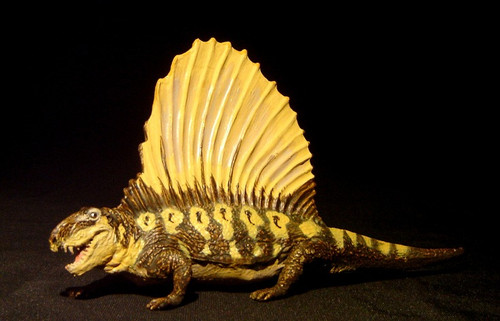 Carnegie's improved resculpt of the synapsid super predator.
The Carnegie Dimetrodon is one of the most scientifically accurate sculpts of the species available. From the kinked jaw lined with two distinct types of teeth, to the sprawled gait of a mammal-like reptile, this Dimetrodon has it all. Although not technically a dinosaur, this Permian predator's popularity is so pervasive, he is often displayed awkwardly alongside his Mesozoic kin throughout many media outlets. Skeletal remains of this synapsid super predator have been discovered all over the United States. This means that the Dimetrodon was essentially the Starbucks of its day, only instead of selling you overpriced junk food, it would simply tear you to pieces.

The original Dimetrodon in the Carnegie Collection was made to scale with most other creatures from the line, making it one of the tiniest animals in the entire collection. This new resculpt is much larger, at 1:20 scale and a full 20 centimeters in length. This enlarged version brandishes entirely new details in the body, such as intricate musculature and wrinkled scaly skin along the body. Additionally, the dull green of the original has been replaced by a contrasting combination of chocolate and vanilla hues, which decorate the animal in striking patterns, much like today's predatory reptiles. The distinctive dorsal spines are believed to have once held a sail, possibly used in display or thermoregulation. According to one study, the additional surface area provided by such a sail could have allowed the animal to heat up twice as quickly - very important for an ectothermic predator.