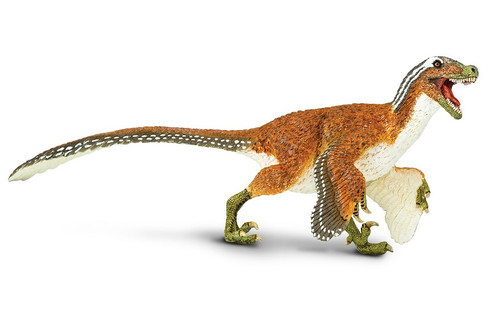 Velociraptor was first discovered in the Gobi Desert, Mongolia, during an expedition organized by the American Museum of Natural History in 1923. Velociraptor was described and named the following year. Velociraptor literally means ‘swift robber’, while the species name V. mongoliensis refers to the country where it was unearthed. Velociraptor belongs to a group of ‘raptor’ type dinosaurs more properly known as dromaeosaurids. This group includes the Chinese Microraptor and Sinornithosaurus, which have both been found preserved with a beautiful covering of feathers. Because dromaeosaurids are so closely related, it is certain that they all, including Velociraptor, had feathers. Although no soft tissues or feathers have ever been found preserved alongside a Velociraptor skeleton, structures called ‘quill knobs’ have been identified on a Velociraptor arm. These bump-like features are also present in modern-day birds and indicate the attachment points of large arm feathers. The feathered, wing-like arms of Velociraptor were not suitable for flight, but may have been used in mating displays, to help regulate its temperature, or to help to cover their nests when they were brooding eggs.