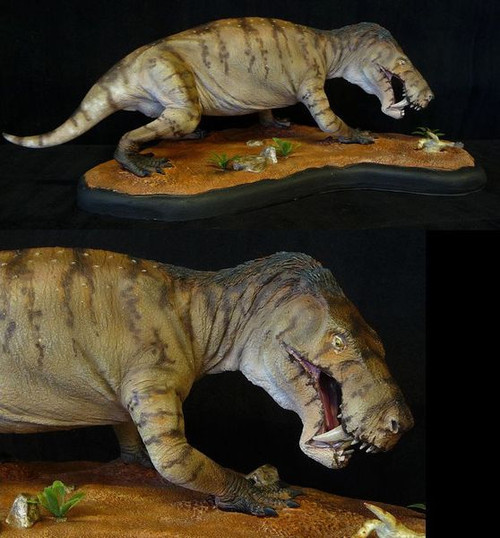 A Permian predator, sculpted by Shane Foulkes, and finished by Martin Garratt.
The sun blazes without mercy in the afternoon Permian sky. When the tiny-tusked female Diictodon emerges from her burrow, she expects to be harassed by a horde of chattering, amorous males. Today is strangely quiet. She makes her way to the shrubbery without interruption. The meal is satisfying, but she reflexively freezes at the sound of nearby shuffling. The noise grows louder, reverberations passing underfoot. Whatever is approaching, is is no lusty bachelor; it is something many times larger than herself. She scampers back across the flood plain, dotted with the burrows of many unseen Diictodon. The sound of her pursuer grows even louder still. Panic-stricken, she dives into the cool refuge of the nearest hole. It is the recently abandoned home of an adolescent Diictodon, and a poor fit for her well-fed body. Frantically, she digs and pulls herself deeper inside. She is only halfway in when she feels the blast of hot breath on her hindquarters.

Acclaimed paleoartist Shane Foulkes sculpted this diorama for Dan's Dinosaurs in 2012, fulfilling the dreams of paleontology enthusiasts who wish to see a ferocious gorgonopsid brought to life. This model depicts the timeless struggle of predator and prey, with a burrowing Diictodon desperate to escape the massive jaws of Gorgonops.

Like most resin kits, this model may require several weeks to cast and finish. Finished models ship from Martin Garratt's workshop in the UK. This model is also available as an unfinished resin kit.