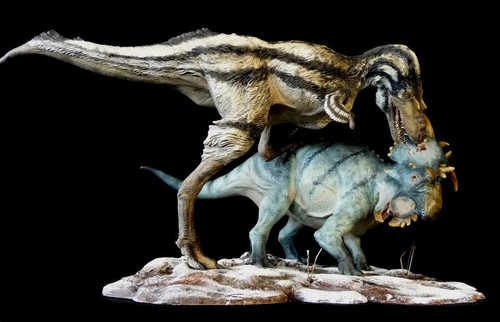 At the Pachyrhinosaurus herd's flank, a band of gaudy young bucks shove and snap at one another. While physically impressive, these recently matured males are not quite ready to challenge their leader. They practice on one another with the impetuous energy of juveniles, sometimes at the expense of their sacred vigil. The shadows conceal their greatest fears, killers more mindful and fleet footed than any of them. The oldest of the subgroup is the first to catch a glimpse of movement from the treeline. He instantly issues an alarm, sending the herd stampeding into a defensive formation. The smallest are flushed toward the center, while the males form up around the perimeter. Only seconds after assuming his most intimidating posture, a sharp impact meets his blind side. He barely registers the pain signals from his back and crest, reflexively twisting into his unseen attacker with his superior strength. The frozen earth provides treacherous footing, but this does nothing to dampen his desire to face his foe. The battle has only begun.

Following the great success of the Diabloceratops, I wanted my second project with Sean Cooper to be a more collaborative process, featuring a dramatic battle scene. I set about sketching a violent encounter with Gorgosaurus and Pachyrhinosaurus, and Sean did an amazing job bringing my vision to life. This epic encounter provides a fresh twist on the classic theropod versus ceratopsian fight, with gorgeously reconstructed animals based on the latest science. Final paint work was implemented by Martin Garratt. The feathery coat on the carnivore was designed with the striking patterns of the black and white warbler, while the herbivore's paint design was inspired by the Cayman Island blue iguana. Multiple fresh wounds can be found in the scene, which takes place on a perilously slick and snow dusted Cretaceous battleground.

The development process of Exclusive Model No. 8 Gorgosaurus vs. Pachyrhinosaurus from http://DansDinosaurs.com All images copyright Dan's Dinosaurs