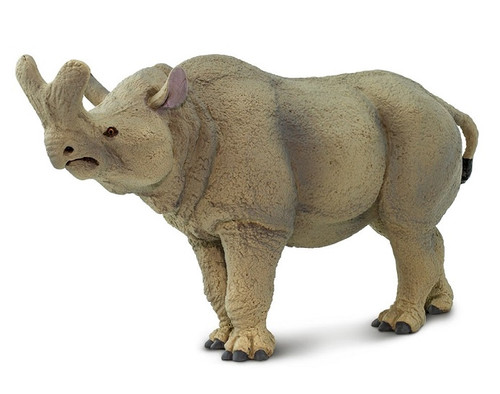 Megacerops has a convoluted history of discovery, due to competing paleontologists all attempting to be the first to name what would turn out to be multiple examples of the same species. The history would be even further complicated by the work of Henry Fairfield Osborn, who described the Brontothere family but based many of his assumptions on incorrect data. His work would not be fully corrected until the 2000s, when a proper family tree for the Brontotheriidae family was created by Matthew Mihlbachler. Though Megacerops had large forked “horn” on its nose, it is not thought that they used them for head to head battles, as the bases of these horns were composed of soft, spongy bones that could not stand up to such use. Scientists believe they were probably used more for display, and healed rib bones on some Megacerops skeletons indicate that they may have been used in combat by swinging them into the sides of their opponents, rather than horn-to-horn.