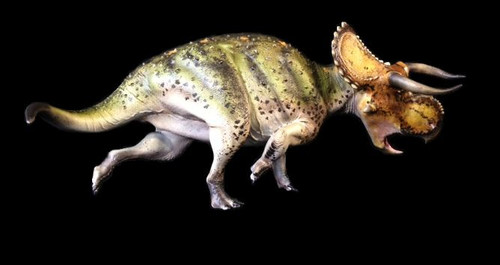 Discontinued - This limited edition exclusive has been sold out. Thanks for your support!

Under a veil of shimmering ferns and swarming mosquitoes, a trio of Rhinorex gorge themselves on the verdant bounty of the wetlands. The insatiable diners make such a ruckus, they are oblivious to the panicked cries of their young infant. A few careless steps brought the baby hadrosaur into a small pond, and now even her voice was muted as her tiny mouth was flooded with water. For a moment, she completely vanishes below the surface, only to reemerge seconds later, riding a huge keratinous prong. She dangles from this slippery lifesaver for several seconds before dropping unceremoniously to the soggy peat below.

Only now does the mother Rhinorex arrive at the scene, flanked by her male compatriots. The muddy infant staggers toward them, while they bark and bay angrily at the horned beast that seemed to materialize from the pond. Safely nestled below the huge body of her mother, the infant continues to shiver and lick at the bitter sludge caking her body, until she catches sight of the strange animal. She blinks her large eyes at her accidental rescuer, uncomprehending. The Nasutoceratops appears bored, staring back at the ungrateful family, now harassing him. He takes his time working his jaw on a chewy root, the nutritious prize he collected from the water. With minimal effort, the hard root disintegrates between his dental batteries, and he swallows. Each Rhinorex is twice his size, yet they grow nervous before his unmoving bulk. Without warning, the horned creature bellows and charges, causing the hadrosaur family to turn tail and flee into the forested swamp. Peace has been restored to his pond.

The Nasutoceratops was named in 2013 for its large nose, though its appeal is likely owed to its huge bull-like horns. Andrew Sides digitally sculpted the animal for this 2014 release, reconstructing the ceratopsian in breathtaking detail. High resolution 3D printing transforms the digital sculpt into a physical model, which is cast in resin to preserve the fine detail of the original design. The final casting is key fitted for easier assembly. This piece makes an excellent addition to any 1:15 collection or display featuring the dinosaurs of Cretaceous Utah.

Click "Product Videos" below for a look behind the scenes of this model.

A behind the scenes look at the creation of the Nasutoceratops exclusive model. Available from http://DansDinosaurs.com