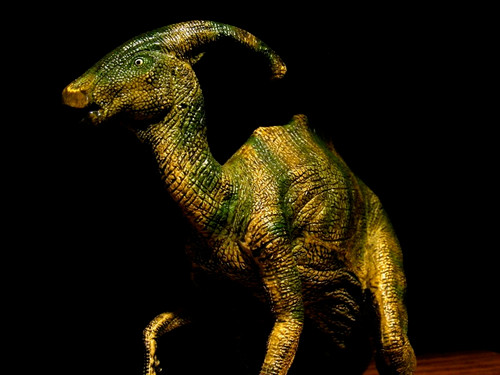 A lavishly detailed figure based on the Parasaurolophus from Jurassic Park.
From the world renowned manufacturer in France, Papo presents the Parasaurolophus figure.  This figure is sturdy enough to hold up to child's play, yet it bears all the detailed realism of a hundred-dollar sculpture.  Easily the most famous of all hadrosaurs, or "duck-billed" dinosaurs, the parasaurolophus is instantly recognizable by its distinctive crest.  Scientific reconstructions of this tube have enabled us to hear what sounds the animal may have been capable of reproducing - rather low calls, like a foghorn.  The figure is in mint condition, still in its original protective bag and signature display tags.

This figure is based on the sculpt of the Jurassic Park Parasaurolophus, yet it looks far better than any of the original Jurassic Park toys.  The Parasaurolophus has the rare distinction of being the only herbivorous dinosaur to appear in all three Jurassic Park films.  The typical beige and pink coloring of its cinematic form has been swapped for a greener hue.  Parsaurolophus did bear this emerald coloration in its brief cameo for Jurassic Park, but the herbivore played a larger role in The Lost World.  Herds can be seen galloping alongside the hunters, with one eventually being shot with a tranquilizer and then ensnared.  The task required several grown men - at one point, the Tyrannosaur-sized Parasaurolophus actually lifts one of its captors high into the air.  The hadrosaur later exacts vengeance by causing mayhem in the hunter's sabotaged camp.