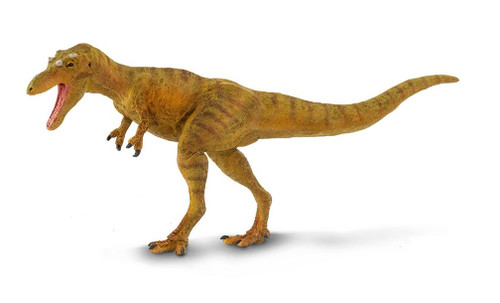 Qianzhousaurus was discovered in China in 2014. While many dinosaur fans know Tyrannosaurus rex, there were many other dinosaurs in the Tyrannosauridae family. While some were as large and bulky as T. rex, others were smaller and slenderer, like Qianzhousaurus. The longer snouted tyrannosaurs likely occupied a different ecological role than their larger cousins. The slender snout earned it the nickname “Pinocchio Rex”. The figure is sculpted with lips, based on the idea that as a land-based predator, Qianzhousaurus would need something to protect its teeth from the open air.