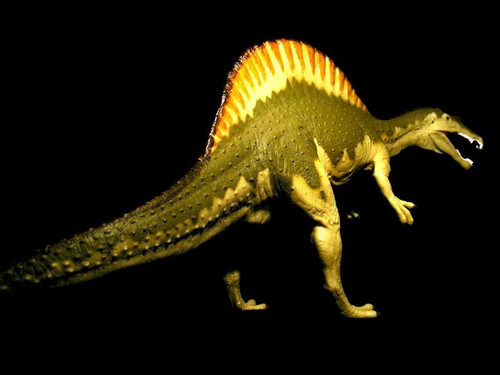 The 2009 version, which incorporates the newest scientific research.
Replacing the original "sail-backed Allosaur" Spinosaurus figure in the Carnegie line is this new 2009 release of the Spinosaurus. This is one of Safari's most anticipated figures of all time - it is the largest carnivore in the entire Carnegie Collection, based on the longest carnivorous dinosaur ever known to walk the planet. This figure is over a foot long, and its body is attractively adorned with rows of scutes along the flanks. It is one of the most scientifically accurate reconstructions of the species available, from the distinctive kinked jaw to the tiny nasal crest.