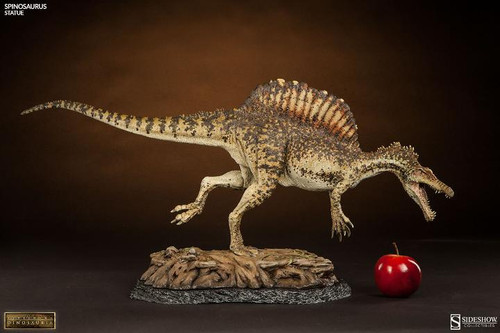 The original Dinosauria Spinosaurus was released in 2010. The manufacturer released this second version in 2015, sporting a new paint application and granting another chance for collectors to own this beautiful statue.

She's been scanning under the mangrove roots for what seems like an eternity. Prior to this, her technique was perfect. She waited patiently, motionless, as the massive fish unknowingly swam closer and closer. With perfect timing her eloquent long snout snapped forward and cut a swath into the brackish water. The taste of fish oil filled her mouth. Delicious! She tried pulling the fish out using her neck alone, but to her surprise, it was much too heavy. This is where her ridiculously large "meat hook" claws worked wonders. Giant sickle shaped rakes assisted in the struggle of landing her bounty. Upon hauling the enormous catch out of the water it began to wriggle from her jaws and then slip from her hands! To add to the ordeal, its muscular, plated tail thwapped the side of her head stunning her, paralyzing her reaction time. In that split second moment, the fish slithered under the ancient deltas prop roots.Her head scanned side to side. Her nose huffed. Her claws clacked together as if trying to remember the feel of the biggest fish shed ever had the pleasure of nearly catching.From somewhere ahead, the sound of splashing caused her to perk up. Down river, behind a slimy log she sees the telltale sail-back of another Spinosaurus, and judging by its movement, it has a fish in its mouth. A big fish. HER fish!She finds a solid stretch of bayou soil and launches herself onto it. Running at top speed, she does her best to reach the commotion before that damned fish slips away again! The other dinosaur does not see her coming and is blindsided by a Spinosaur that outweighs it by at least a third. Amid a splash of brackish water, the smaller of the two plunges into the swamp. The muscular undulations of the wounded fish leave welts in the underlying mud. She snaps. Misses. Another snap. Got it! The fish puts all its weight forward and in turn pulls its captor along the muddy edge of the water. She struggles to hold on...to no avail. The fish slips away and disappears back into the murk.The smaller dinosaur stands back up and delivers a deep, bellowing growl. She is in no mood for it. She snaps in defiance, multiple times. With the last attempt, her crocodilian maw finds its mark and latches onto the others snout. The struggle is just enough to scare the smaller Spinosaurus into finding another spot to fish, leaving her to stare down into the water at her own reflection and curse the one that got away.

Sideshow Collectibles is proud to bring you the latest addition to the Sideshows Dinosauria collectible line, the Spinosaurus Maquette. This dynamic maquette captures the grace and power of this ancient animal of the Cretaceous Period. Designed with the insight of renowned paleoartists, each piece is individually painted and finished, each with its own unique quality and detail that is the trademark of a handcrafted Sideshow Collectibles product. The Spinosaurus Maquette is an impressive museum quality piece, an outstanding addition to any display.