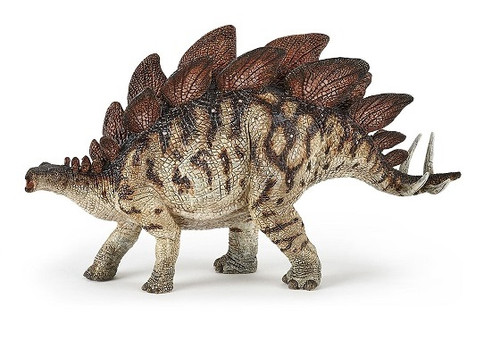 From the world renowned manufacturer in France, Papo presents the Stegosaurus figure. This figure is sturdy enough to hold up to child's play, yet it bears all the detailed realism of a hundred-dollar sculpture. One of the most famous herbivorous dinosaurs, Steogsaurus carried a distinctive set of plates along its back, which may have aided in display or communication. The long spikes on the end of its tail were likely an excellent defensive weapon to keep Jurassic predators like Allosaurus at bay.

This figure is based on the sculpt of the Jurassic Park Stegosaurus, yet it looks far better than any of the original Jurassic Park toys. It retains the fearsome build of the animal seen in the movie, which starred in the The Lost World's first major action sequence. Animal behaviorist Sarah Harding got a little too close to a juvenile Stegosaurus and startled it, causing the adult herd to swarm her, nearly impaling her with a barrage of heavy tail spikes.

This version was released in 2019 and features a striking design of contrasting patterns across the body.