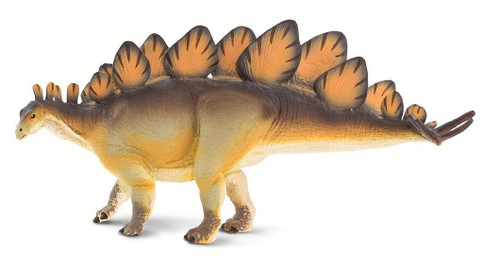 Stegosaurus was discovered and described in 1877 by Othniel Charles Marsh. Originally, its plates were thought to lay flat on the dinosaur’s back, like a turtle’s shell. Later, more complete findings showed that they stood up vertically on Stegosaurus’s back, though their exact arrangement is still something of a mystery. Though sometimes shown in a symmetrical double row, the most widely accepted current theory is that the plates were staggered in two alternating rows.

The function of these plates is something of a mystery. It was originally believed that Stegosaurus used them for defense, but due to their somewhat thin and fragile nature, this is unlikely. They may have been used to help regulate body temperature, or for display.

A recent, well-preserved Stegosaurus showed that these dinosaurs had additional bony protective armor on their chin and throat, called “gular armor”. Tiny bony structures called “ossicles” protected the underside of the animal’s neck, like chainmail armor.