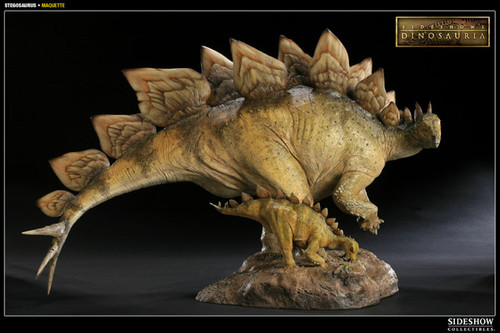 Spears of light pierce through the canopy of conifers and cycads in the early afternoon and warm the back of the colossal Stegosaurus. Marching beneath the canopy, the plates lining her spine heave noticeably with each of her movements, a phalanx of anatomical shielding. She moves with caution, taking deliberately plodding steps and sweeping her massive tail in wide arcs over the ground. The sound of hurried footsteps approaching from behind causes her to slow her pace. She readies for the intruder, turning sidelong in an effort to make her hulking form appear even larger and more formidable. Dipping down on her forelimbs and raising her posterior to its greatest possible height, she swings her thagomizer in tight, rapid ellipses, signaling her agitation.The low-growing foliage bursts apart as a young Stegosaurus charges forward. The mother relaxes her defensive posture, welcoming her lone child at her side. Only one other juvenile had survived as long as this youngling... until three days ago.At that time, when the Stegosaurus family was foraging at the edge of a clearing, a trio of Ceratosaurs launched from concealment. The mother was able to deftly deliver an overwhelmingly destructive strike to the first assailant, driving two thagomizer spikes deep into the back of its skull, dropping the brash carnivore instantaneously. A final tremor ran through the body of the dying Ceratosaur and up the length of the mother tail moments before she exhumed her weapon from her fallen foe. As she struggled to free her spikes, one of the Ceratosaurs closed in on her children. Its upper jaw drove downward like a hatchet into the flank of the closest youngling, cleaving it open and sending the juvenile's sibling scurrying in a frightened dash to its mother. The smell of the carnivores lingered as mother and child solemnly lumbered from the scene.The horrid, familiar stench is now thick in the air and the forest falls under a blanket of cold silence. The mother stays her stride, her child dutifully imitating this sudden behavior. She scrutinizes the forest while her offspring, distracted, paws at the earth in an attempt to uproot a small plant. A twig snaps in the shrubbery off to her right, and the titanic Stegosaurus rapidly turns toward the sound, prepared for any attacker.

Sideshow Collectibles is proud to bring you the latest addition to the Sideshow's Dinosauria collectible line, the Stegosaurus Maquette. This dynamic maquette captures the grace and power of this ancient animal of the Jurassic Period. Designed with the insight of renowned paleoartists, each piece is cast in high-quality polystone, hand finished and hand painted to exacting standards. Presenting mother and child as they traverse the ancient forests, the Stegosaurus Maquette is an impressive museum quality piece, an outstanding addition to any display.