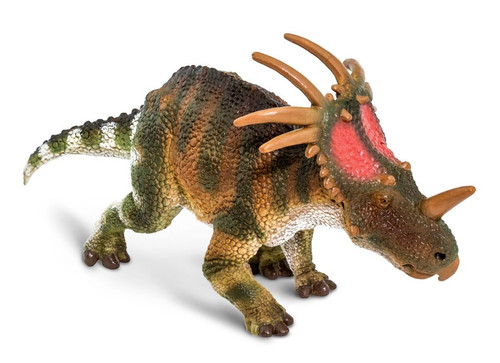 Styracosaurus could grow almost 20 feet long and weight over 6500 lbs. It lived around 75 million years ago in the Late Cretaceous Period, in what is now Alberta, Canada. It was found in the Dinosaur Park Formation.

Styracosaurus was discovered in 1913 by C. M. Sternberg and named by Lawrence Lambe. The name Styracosaurus comes from the Ancient Greek “styrax” which refers to a spike at the end of a spear shaft.

The purpose of Styracosaurus’s large spikes and frill remain the subject of much debate among scientists. Many theories have been proposed, such as that the frill and horns were used in defense against predators (including the Tyrannosaurus relatives Gorgosaurus and Daspletosaurus), or that they served to impress potential mates (and thus may have been brightly colored), and that they helped regulate the dinosaur’s body temperature.