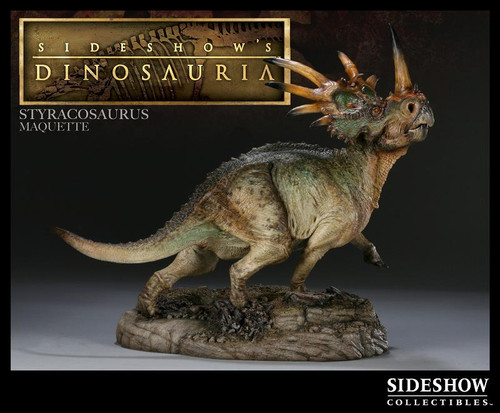 A striking statue of a Styracosaurus on sentry duty, sculpted by David Krentz.  Discontinued - Sold Out

"After losing his last rut, he has been relegated to protect the periphery of the herd. Still a useful position but also dangerous. The more skillful bucks in the center of the herd always get the first pick of the females. For now he will do the best he can and prove his worth. His horns and head are thick with keratin, a sign of virility. During the rut, he can flush blood to his frill and horns to create a magnificent display. Perhaps this year he was too eager to show off his colors and forgot to work on the skills that turn battling male styracosaurs into clattering warriors as they lock horns. Instead of mating with his favorite female, he now patrols far from the herd to issue low warnings that only his species can perceive.Now the eggs are hatching, and rather than sit back and sulk, he will prove his worth in this most crucial of times. Already he has mortally wounded a young tyrannosaur and intercepted a big varanid lizard. But he fears today is different. The chirping of the hatchlings has brought the clever Troodontids to gather in a pack in the sea of cattails before him. Their keen intelligence is daunting to a simple creature such as himself, and its good to have a keen sense of smell in times like these.He lifts his head high, shaking his massive rack of horns and lurches forward at the oncoming rush of raptors. One group attempts to confuse him while the other slips by! With one massive sweep of his head, he sends two of the raptors high in the air. They land on the group passing by his flank, shattering delicate limbs. A quick stomping on their tangled torsos makes quick work of them. Without missing a beat, he turns towards the others and lurches forward in a mock attack. They disappear into the swamp like a blur, leaving nothing but feathers behind. He surveys the scene, fills his lungs with air and gives a low rumble. The females hear. Their children are once again safe."

"Sideshow Collectibles is proud to bring you the latest addition to the Sideshow's Dinosauria collectible line, the Styracosaurus Maquette. This dynamic maquette captures the grace and power of this ancient animal of the Cretaceous Period. Designed with the insight of renowned paleoartists, each piece is individually painted and finished to exacting standards, each with its own unique quality and detail that is the trademark of a handcrafted Sideshow Collectibles product. The Styracosaurus Maquette is an impressive museum quality piece, an outstanding addition to any display."