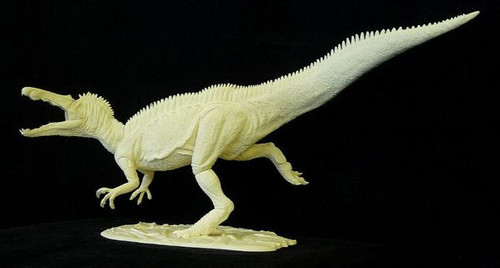 A massive spinosaurid on the attack.
The female Suchomimus languishes in the shady outskirts of the marshlands. Here she finds relief from the humidity, and a small clearing that allows her to observe the river's edge. From this idyllic throne, she watches her mate. His gate is peculiar, and he splashes noisily like a juvenile. After a moment of playfully smacking the water, an ambitious crustacean can be seen dangling painfully from the skin of his lower jaw. One excessively dramatic swipe of his head sends the tiny critter sailing through the air for three full seconds before plopping back into the water; the male nearly loses his own balance in the process. Even to a more sophisticated brain, the female's choice of mate is a puzzle.

After a light nap, the female awakens to the sound of a courtship call, one far too harmonious to belong to her mate. Her enormous body rises from slumber, and she makes her way to the bank to investigate. Here she finds her male bedazzled by another female. This petite stranger appears much younger than herself, freshly brimming with sexual maturity, her graceful advances conveying all the lusty confidence of youth. The large female does not know why a deep growl rumbles from her throat. She does not notice the muscles of her own giant legs pulsing with tension. As the dainty stranger dares to sensually draw her flank along his, a roar of fury erupts over the swamps. When the flirtatious female at last notices the giant, enraged female of her species bounding toward her, it is too late. She cannot imagine that in this horrific spectacle, her splendid beauty will be lost for all time.

It was at the start of the 21st century that popular media began to draw attention the long-snouted spinosaurids. The familiar ferocity of their crocodilian heads, paired with the terrifying mobility of a bipedal dinosaur, make them irresistible to the human eye. This reconstruction by museum sculptor Eduardo Pantoja Moreno joined the Dan's Dinosaurs exclusive model line in 2013. It is a large-scale reconstruction that conveys the incomprehensible terror of an eleven meter predator breaking into a full charge.