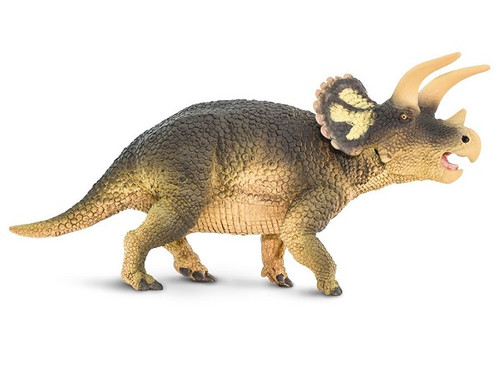 Triceratops was one of the last non-bird dinosaurs, living right up until the extinction event that occurred at the end of the Cretaceous Period around 66 million years ago. Since its discovery in 1889, numerous remains have been found including complete skeletons, making this one of the most well-known and understood dinosaurs. Examples of young, middle-aged and older Triceratops have been discovered. The purpose of the distinctive three horns and frill of Triceratops has been a subject of great interest among paleontologists. Some scientists believe they used their horns for defense from predators and that their frill protected their vulnerable neck. More recent interpretations, however, lean towards the idea that the frill was likely brightly colored and may have been used to attract mates, or for identifying individual animals. The horns may have been used in dominance displays and battles among males for the attention of females.

This sculpt by Doug Watson was released by Safari in 2018.