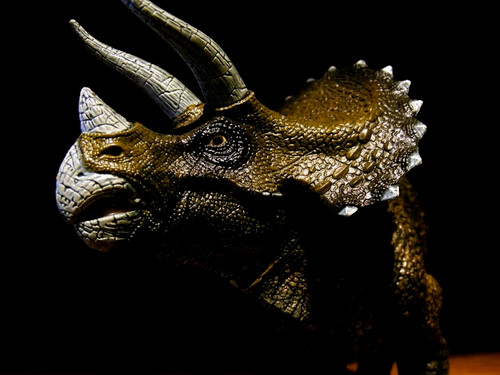 A tremendously detailed figure based on the Triceratops from Jurassic Park.
From the world renowned manufacturer in France, Papo presents the Triceratops figure.  This figure is sturdy enough to hold up to child's play, yet it bears all the detailed realism of a hundred-dollar sculpture.  One of the most famous herbivorous dinosaurs, Triceratops is traditionally depicted as the ultimate battle contestant against Tyrannosaurus.  The large bony frill was likely used in either display or protection of the neck, while the trademark facial horns served as deadly weapons even a huge carnivore had to be wary of.  The figure is in mint condition, still in its original protective bag and signature display tags.

This figure is based on the sculpt of the Jurassic Park Triceratops, yet it looks far better than any of the original Jurassic Park toys.  It retains the natural brown hue and fearsome build of the animal seen in the movie, which starred in both the first and second Jurassic Park films.  The tour group encounters a sick Triceratops during their ride through the park, and in the film's sequel, the mighty ceratopsian charges through the hunter's camp, causing massive destruction like a Cretaceous wrecking ball.