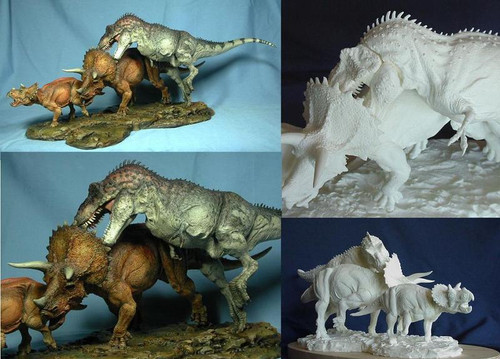 The classic clash of predator and prey is shown in this stunning diorama kit.
One of the most famous battles depicted in the dinosaur kingdom is the individual combat between Triceratops and Tyrannosaurus rex.  This resin model kit contains an extraordinarily detailed look at how such a scene may have played out.  The herbivore appears to be gallantly defending its young, while the mighty theropod clamps its jaws down on the ceratopsian's neck.  The adult Triceratops is not likely to survive this encounter, but her sacrifice may at least allow her offspring to survive.  It is unknown whether dinosaurs demonstrated acts of altruism like some modern animals, but the drama of the scene is beyond question.  This exquisite diorama has been brought to life by paleoartist Sean Cooper.