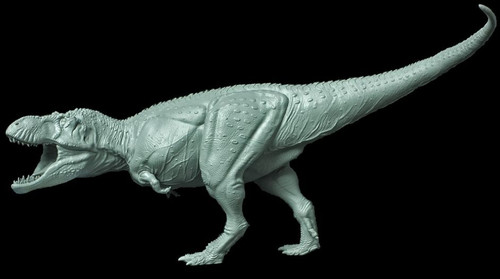 Sporadic chirping is the only sound punctuating the morning breeze, the swaying branches overhead casting jagged patterns of sunlight on the body of the sleeping titan below. His size affords him a luxurious slumber that seems to occupy most of his time. When the gentle wind makes a slight change in direction, a distinct chemical signature sends a sudden discharge through his brain, and he is instantly roused. The hungry flies dancing around his snout are blasted off course. Yawning, the titan rises to full stature - he is large even for his species - and draws his snout through the air. One decisive turn, and he follows the length of the woods to a sun-soaked clearing.

There is majesty in his gait. The forest is his personal property, a kingdom and home, and he behaves as such. It takes time for his massive bulk to pass where the trees allow him, but he finally halts at a shredded stump. Massive nostrils flare, sucking up the invisible plethora of data. The piquantness of hadrosaur carrion is tinged with the same elements that wafted its way to his nose. He lifts his head, eyes targeting the recess where he dragged yesterday's kill. The earth is littered with the splintered bones of previous meals. A nearly vertical tail bobs into view, and his eyes now confirm what he first detected during sleep. Another tyrannosaur has located his pantry, and the intrusion cannot go unchecked. One dreadful roar is the only warning he offers before advancing.

This reconstruction of the tyrant king began with a digital sculpt by Andrew Sides. High resolution 3D printing transforms the digital sculpt into a physical model, which is cast in resin to preserve the fine detail of the original design. The final casting is key fitted for easier assembly, and makes an excellent addition to any 1:40 collection or display.