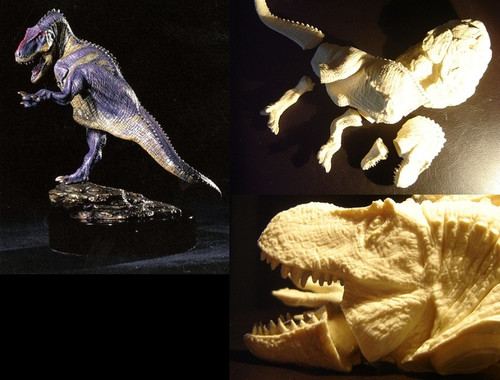 The artist responsible for the Jurassic Park T. rex presents his own design in a resin kit.  Discontinued - Sold Out

This is one of the few remaining model kits from Michael Trcic's Meso-Zoo Collection. This superbly detailed model depicts a kicking Tyrannosaurus, and serves as a stunning companion piece to the Triceratops model kit.

Michael Trcic on Dinosaurs:
"Dinosaurs have been my passion since I was six years old. I was born and raised in Pittsburgh, Pennsylvania - the home of the famous Carnegie Museum of Natural History. I spent many a long afternoon studying the mounts in the dinosaur hall. Ray Harryhausen and Willis O'Brien became my inspirations and heroes and from them I developed an early interest in stop motion animation. O'Brien's 1933 motion picture "King Kong" was the catalyst that spurred my interest in both dinosaurs and special effects. I studied with the Pittsburgh Filmmakers while attending Point Park College, with the goal of a Degree in Filmmaking. My first taste of special effects animation work came while working part time at Anivision, a Pittsburgh based animation studio owned by Rick Catizone. After working on several movies in Pittsburgh, I made the move to Los Angeles in January of 1987. I gained experience creating special effects make-up and puppeteering on many "B" horror movies. The culmination of my 12 year film career in special effects was as key sculptor and puppeteer of the life-size Tyrannosaurus Rex for "Jurassic Park." At the end of production I decided I had had my fill of the Hollywood life and that it was time to branch out on my own. My lovely and talented wife Christine and I built a home in Sedona, Arizona where I began my own sculpture studio in 1992."