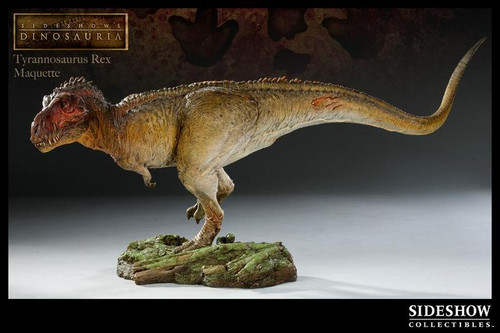 A unique statue featuring an aged Tyrannosaurus, riddled with ancient battle scars.  Discontinued - Sold Out
"Known as the Tyrant of Hell Creek, this T.rex stands alone. He has hunted the edge of the old growth forest for more years than he can remember. The food comes to him, walking past the forest on their regular migration routes, and he can count on the old or inexperienced of the herds to wander into his haunted woods.He needs no social group, for he is a solitary hunter who has perfected his tactics. Other tyrannosaur groups have tried to claim his prized territory, yet he has managed to fight them off. One battle with a gigantic matriarch nearly killed him, leaving a massive wound on his face as a reminder. The number of life-threatening wounds he has sustained and survived is staggering. Triceratops horns, ankylosaur tail clubs and hadrosaur kicks; all wounds have healed leaving him to prowl to woods like some kind of indomitable monster. But perhaps the killer to claim him is not an animal at all, but the bone disease that slowly creeps through his ancient body.Stalking through the forest, something catches his attention. He stalks toward the intruder, the forest floor so ancient that the moss and moist fallen logs muffle his heavy footsteps. Turning his scarred heard for a better look, he sees that a young tyrannosaur has dared to enter his territory and must be taught a lesson."

"Sideshow Collectibles is proud to bring you the latest addition to the Sideshow's Dinosauria collectible line, the Tyrannosaurus Rex Maquette. This dynamic maquette captures the power of this ancient animal of the Cretaceous Period as he stalks through an old growth forest. Designed with the insight of renowned paleoartists, each piece is cast in high-quality polystone, hand finished and hand painted to exacting standards. The Tyrannosaurus Rex Maquette is an impressive museum quality piece, an outstanding addition to any display."