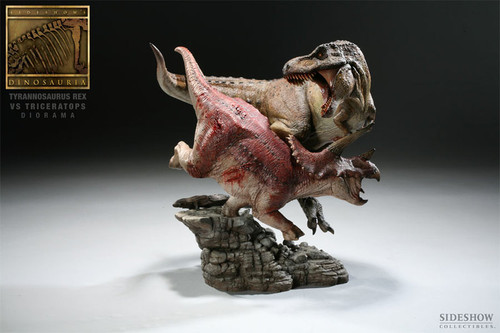 This action-packed diorama depicts the classic struggle between Triceratops and Tyrannosaurus.  Discontinued - Sold Out

"Nearly 68 million years ago, the sun beat down across the prehistoric landscape of what would later become the land mass called North America. It is late afternoon, and as most creatures do when the temperature becomes too oppressive, the old Bull Triceratops makes its way to the delta of an old riverbed lush with vegetation and shade along its drying banks. Standing well over 3 meters in height, this unusually large male is an impressive and robust veteran with a fully pronounced frill and brow horns. The rough, worn surfaces and rakish broken tip of one of the bulls menacing lances give him a certain weary confidence that only seems to add length to its already massive span. The ancient creature plods along lazily and unconcerned, comfortably grazing the lower limbs that provide a nice, shady place to eat.Familiar with hunting and scavenging along the dense cover at the edge of the river, the olfactory nerves of a juvenile male Tyrannosaurus tingle with anticipation as it catches the scent of the Triceratops even moments before its keen binocular vision spots the lumbering herbivore as a trophy prize. Although still young in both age and stature, the head and massive maw of this aggressive T.rex bear the scars of combat and experience. With a thunderous snap of dry branches, the familiar sounds of the placid delta shatter with a violence of action quick and terrible. A lunge and slash of rending teeth and the great carnivore springs upon the unsuspecting Triceratops catching him across the back with grazing wounds that run red in the midday heat. Not one to be caught so easily, the mighty bull Triceratops turns sharply on the crumbling bank. At the critical moment, with the precision of instinct and experience, the animal makes a move that saves him from an almost instant death. Although the sub-adult Tyrannosaurus holds the distinct advantage of height and predatory agility, his youth and aggression allow a calamitous mistake. Again along the unsteady ground he over-anxiously charges the massive bull, who is this time braced for the attack. Standing his ground with conviction, the seasoned Triceratops concentrates its weight unfalteringly to mortally gore the charging carnivore, leaving him reeling and off balance as the dry earth gives way beneath the creature's tremendous mass."

"Instinct and survival, the final moments play out...Sideshow Collectibles is proud to bring you the premier piece in the Sideshow's Dinosauria collectible line, the Tyrannosaurus Rex VS Triceratops Diorama. This dynamic diorama captures the primordial duel as these ancient animals of the Cretaceous Period clash, hunter and prey. Designed with the insight of renowned paleoartists, each diorama is cast in high-quality polystone, hand finished and hand painted to exacting standards. The Tyrannosaurus Rex VS Triceratops Diorama is an impressive museum quality piece, an outstanding addition to any display."