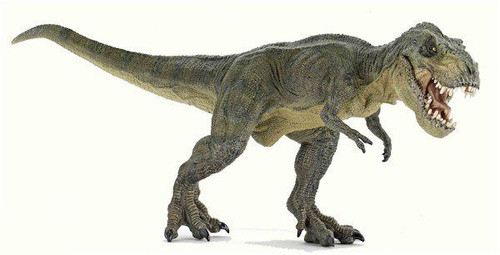 It was 2005 when Papo first introduced their Tyrannosaurus rex figure. Richly detailed and heavily inspired by the Jurassic Park films, this figure went on to become a bestseller for the company, and one of the most popular dinosaur figures ever produced. In 2012, Papo unveiled an entirely new sculpt of the tyrant king. Like its predecessor, this reconstruction is based on a fictional dinosaur, although instead of "Jurassic Park", it takes its inspiration from the 2005 film "King Kong". This figure is resplendent with detail, multiple layers of green paint, and bears a fully articulated jaw. The accuracy of the figure's stance is significantly improved by reorienting the body parallel to the ground, while the active gait provides greater excitement for the observer.