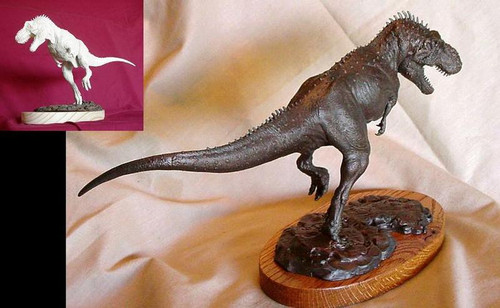 The famous Tyrannosaurus in a model kit, depicted in mid-stride.
For many years, the Tyrannosaurus was believed to be a large, sluggish predator.  Now that the link between theropods and modern birds has been established, the Tyrannosaurus is believed to have been a somewhat more agile predator.  Older tyrannosaurs likely relied on their sheer power and size, while the younger, leaner predators may have used speed to their advantage.  This reconstruction by Sean Cooper has been cast in resin, and clearly presents a view of an active prehistoric predator.  This piece is taken from the original diorama model, which also features a pair of Triceratops.