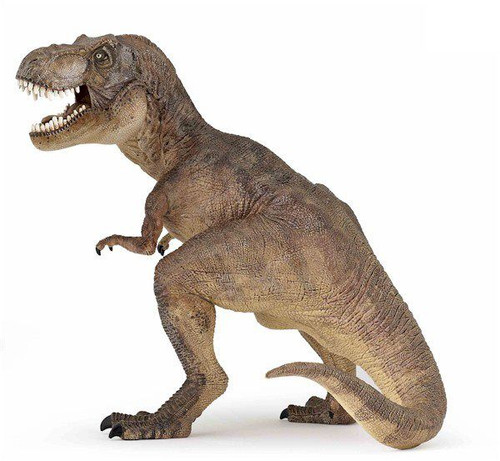 Papo's second version, based on the brown Tyrannosaurus from Jurassic Park.
From the world renowned manufacturer in France, Papo presents the Tyrannosaurus figure.  This figure is sturdy enough to hold up to child's play, yet it bears all the detailed realism of a hundred-dollar sculpture.  Easily the most famous dinosaur of all time, much debate has surrounded the Tyrannosaurus Rex.  This figure is one of Papo's all time bestsellers, and it is easy to see why.  Outfitted in an multiple layers of paint and adorned with outstanding textures across the entire body, this Tyrannosaurus is arguably the greatest dinosaur figure ever released.  The jaws can also be open and shut, exposing the details of the inner jaw and the famous rows of bone-crushing teeth.

This figure is based on the sculpt of the Jurassic Park Tyrannosaurus, yet it looks far better than any of the original Jurassic Park toys.  It bears a natural brown coloration, based on the version from the first Jurassic Park film.  As the films' climaxes indicate, Tyrannosaurus is rightly given hero status as the starring dinosaur in each Jurassic Park film.  When The Lost World opened in 1997, crowds of moviegoers could be heard chanting his name, as though summoning the very spirit of that legendary North American carnivore.  The Papo Tyrannosaurus perfectly captures the essence of the world's most recognizable dinosaur - this is one figure you can't afford to miss out on.

NOTE: Papo discontinued their original green version of this Tyrannosaurus figure in 2012, replacing it with this new brown version.