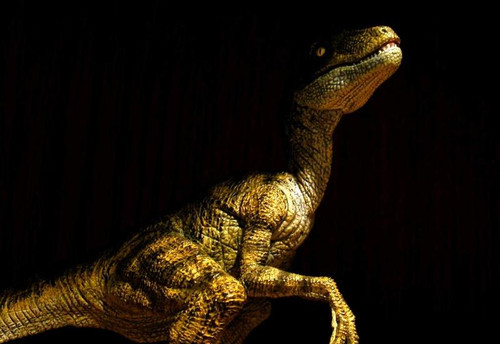 Discontinued (2005 - 2010)
From the world renowned manufacturer in France, Papo presents the popular Velociraptor figure. This figure is sturdy enough to hold up to child's play, yet it bears all the detailed realism of a hundred-dollar sculpture. The jaw is articulated, so it may be posed in any desirable position for display. The name "Velociraptor" was used in the original novel due to the dramatic connotations of the name, with "raptor" meaning "bird of prey", a central theme in the story. In actuality, the human-sized carnivores more closely resembled Deinonychus; real Velociraptors were only about the size of a human child. Though their intelligence was exaggerated for theatricality, these animals were certainly among the smartest living creatures in their time, likely coordinating in groups to strategically take down larger prey.

This figure is based on the sculpt of the Jurassic Park Velociraptor, yet it looks far better than any of the original Jurassic Park toys. The amber coloration and dark dorsal striping lends a somewhat hybrid appearance to the predator, blending the characteristic markings of both the male and female raptors seen in the The Lost World. Like their real life counterparts, these Velociraptor figures are armed with powerful jaws for stripping flesh from bone, and the distinctive killing claw on each major toe. With so much detail packed into a single figure, it's easy to see why the Velociraptor is the bestselling dinosaur in Papo's entire line.