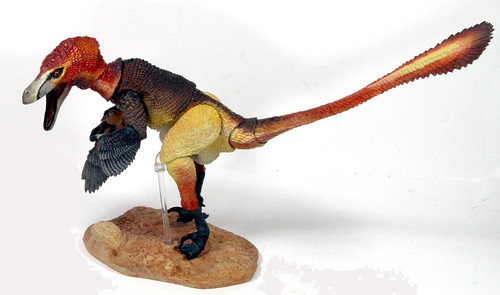 Velociraptor by Beasts of the Mesozoic

Velociraptor mongoliensis (swift thief) - The one we all know and love from the movies - or is it? Though the real Velociraptor was very different from its movie star counterpart, it was no less fierce and dangerous. It used to inhabit an arid desert climate in a part of the world that is now Mongolia. Velociraptor can be distinguished from other dromaeosaurids by its long and low skull, an upturned snout. And let's not forget about that terrible toe claw! This figure is approximately 12" long x 5" tall has 26 points of articulation and includes a base, posing rod, and interchangeable closed running toes.

Note: This model was updated with a revised paint scheme in 2019.