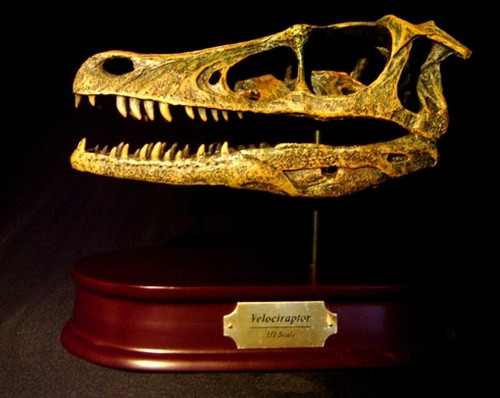 A life-size replica of a Velociraptor skull.
Following its appearance in the blockbuster film Jurassic Park, the carnivorous dinosaur Velociraptor quickly rose to the highest ranks of prehistoric celebrity. While the movie featured large predators more closely resembling bigger species of maniraptorans, real Velociraptors were relatively modest in size, about two meters long from head to tail. Their speed and intelligence made them ferocious killers, with a famous fossil find showing the animal locked in combat with a Protoceratops. The upward curve of the skull makes the species instantly recognizable among paleontology enthusiasts, while its compact size means more collectors can afford this beautiful, life-sized skull replica.

This skull replica is sturdily mounted on an elegant base, complete with the species name plate. An outstanding display piece for the home or office.