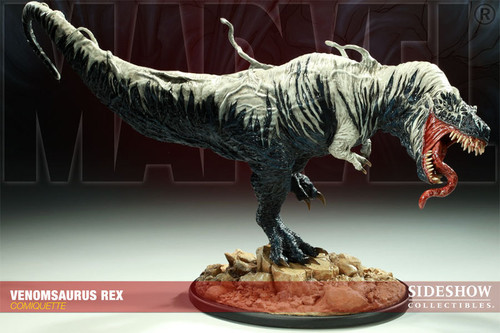 Sideshow's rendition of the mighty Marvel supervillian.  Discontinued - Sold Out
"Fifty years have passed, and all the world's heroes have fallen away. Supervillains have overtaken what was once America - divided the land into territories and harshly repress any whisper of the old ways. Logan remains with his wife and children in Hulkland, formerly California. The disillusioned aged hero refuses to fight back against the beatings and extortion of Bruce Banner's brutal descendants. Hawkeye approaches Logan about a job - a chance to settle his debt with the Banners, and a desperate father accepts.The two set out on a journey to deliver a mysterious package across the country, their route leading straight through neo-America. Among the many threats of the new countryside, dinosaurs were imported from The Savage Land and now roam free. In the former mid-west, they drive past a herd of dinos and realize that they are being followed by a Venom symbiote controlled Tyrannosaurus Rex. As they attempt to shoot at the Vemonsaurus, Emma Frost sees their distress on a security monitor and sends Black Bolt to fight back the beast, allowing Logan and Hawkeye to continue their journey to New Babylon."

Presenting the amalgamation of Tyrannosaurus Rex and the Venom symbiote is the Venomsaurus Rex Comiquette, a beast of the neo-America depicted in the 'Old Logan' storyline. Each piece is individually painted and finished, each with its own unique quality and detail that is the trademark of a handcrafted Sideshow Collectibles product. The Venomsaurus Rex Comiquette is a fantastic addition to any display, a must-have for true Marvel fans.